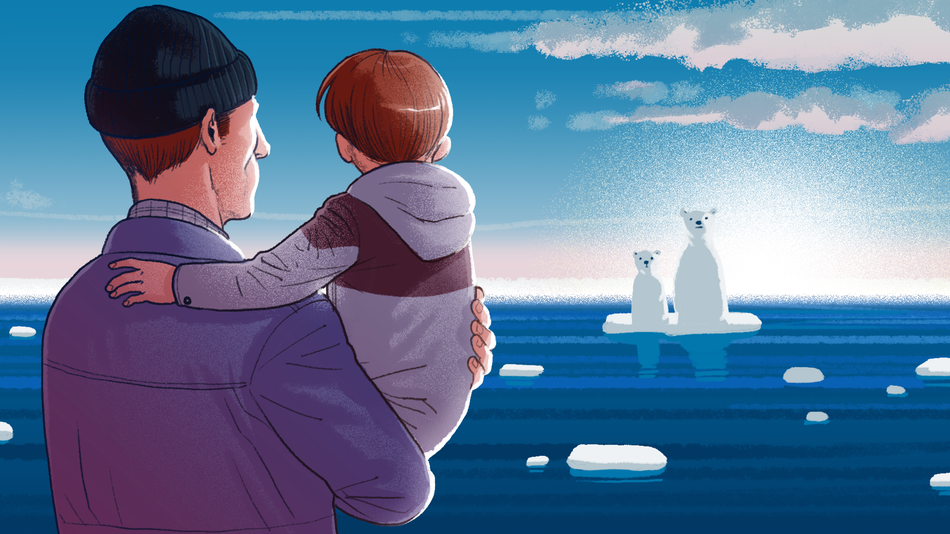 When my 4-year-old daughter discovered the documentary series Blue Planet II, thanks to a relative who shares her love of marine life, I was thrilled that she wanted to watch it instead of animated standbys like The Octonauts and Llama Llama.

I counted it as a parenting victory: My preschooler liked science and exploration and David Attenborough’s voice. When things got real and one sea creature ruthlessly ate another, I explained that it was an example of the food chain. Her grimace turned into a look of satisfaction — the kind that comes with feeling like you understand the world a little better.

Then we arrived at the episode about coral reefs dying off en masse because of climate change. My daughter had a lot of questions, and I teared up looking at footage of the desiccated reefs, thinking about what those images meant for her future. Suddenly I regretted letting Blue Planet II into our lives so easily.

Though my husband and I spent a lot of time outdoors, encouraging our daughter’s interest in science, nature, and conservation, we never explicitly discussed climate change before this. We avoided the topic, I think, because of her young age and the doomsday nature of being on the brink of a major extinction event. How do you tell a 4-year-old the plants, animals, and landscapes she adores are in grave peril?

It turns out, of course, there are plenty of ways to talk about what’s happening to the Earth in an age-appropriate way that doesn’t needlessly frighten a child. The key is to ensure that you’ve laid a foundation for children to appreciate and be curious about the natural world, that you’re capable of discussing basic scientific concepts, and that conversations with children about climate change focus on critical thinking skills and solutions.

Stacie Paxton Cobos, senior vice president for communications and marketing at The Climate Reality Project, a nonprofit organization founded by Al Gore, says parents should first help their children develop an appreciation of the natural world before trying to explain climate change.

That can mean watching a nature documentary, visiting a wildlife center or natural history museum, or introducing a child to natural habitats like a creek, beach, or forest. Such experiences gives kids a sense of why taking care of the earth is important, which ultimately helps them grasp the stakes of climate change — and care about preventing it.

Cobos, a parent of two children under the age of five, uses everyday opportunities like watering flowers, visiting the farmers’ market, and walking instead of driving to help her kids understand different aspects of nature and conservation.

Emily Edmonds-Langham, manager of elementary education at the American Museum of Natural History in New York City, says parents should pay close attention to their child’s interest in the natural world. If they’re fascinated by birds they see walking home from school, try learning more about that species and how your family can help them thrive.

“It’s about running with your child’s interest … rather than overwhelming them with all of the issues around climate change,” she says.

Edmonds-Langham also recommends modeling and explaining household choices focused on conservation (think recycling, avoiding unnecessary plastic products, and selecting food items that produce less greenhouse gases). When you connect such activities to protecting the planet and its resources, children develop a deeper understanding of how human behavior can affect the earth.

Michael Mann, a distinguished professor of atmospheric science at Penn State, says adults often make two mistakes when it comes to discussing climate change with kids: They assume it’s too difficult a concept for them to grasp and believe that they’re not in a position to do anything about it.

Mann said in an email that he initially made those same mistakes when co-authoring his children’s book The Tantrum That Saved the World, a story designed to inspire young readers to do something about climate change.

The book includes a one-page primer that outlines the basics of climate change, which Mann describes as: “Greenhouse gases warm the planet, we are increasing the levels of greenhouse gases through fossil fuel burning, and that this is having a harmful effect on us and other living things.”

Adult readers interested in increasing their knowledge of climate change and its effects can consult numerous resources. Mann recommends sites maintained by authoritative groups like the National Academy of Sciences, Intergovernmental Panel on Climate Change, National Aeronautics and Space Administration (NASA), and National Oceanic and Atmospheric Administration (NOAA). He also suggests resources created by scientists like Skeptical Science and Real Climate, the latter of which Mann co-founded. Both sites debunk myths and provide context for climate research.

Cobos says parents don’t need to teach themselves everything about climate change in order to effectively communicate about it with their children. (The Climate Reality Project recently published an e-book on how families can start conversations about climate change.)

“It’s important for people to grasp the concept themselves, but you don’t have to be an expert about climate change,” says Cobos. “You just need to take the time to help your kids understand some general concepts.”

Focus on skills and solutions

By the time children reach the first or second grade, parents can try having more complex discussions about the causes of climate change and the effects of global warming, provided they use simplified or relatable language.

Edmonds-Langham says elementary school-age children who participate in the museum’s classes and educational programming most often want to know how to help. By fourth grade, kids can understand why climate change threatens habitats and animals, and that human activity is to blame.

“I think one of the things we try to stress is success stories and trying to be action-oriented,” she says. “We want to empower them to make steps toward advocacy.”

Parents can help children focus on making a positive impact, no matter how small. NASA’s Climate Kids site offers practical suggestions for children, including planting their own fruits and vegetables, turning off lights when they’re not needed, and drinking tap water instead of bottled water. Parents can also share inspiring stories of youth activists working to stop climate change.

Empowerment can also come via education. Third graders at the museum, for example, spent some of their time in a yearlong class learning about the difference between climate and weather and developing the basic skills to understand data collection. That included hearing about the types of evidence climate scientists collect or measure, like ice cores, tree rings, and other visible or tangible examples of how climate has changed over the millennia.

Learning why climate and weather aren’t the same is critical for children (and their parents), particularly given that some falsely insist extreme weather events — a blizzard in April, a heat wave in October — mean climate change isn’t real.

“You have to find that balance between freaking them out and explaining the changing world they’re living in.”

Evan Rothstein, an earth and planetary science educator at the American Museum of Natural history, frequently works with middle school children and says they tend to question whether the conclusions of climate science are true. They want to know if polar ice caps are really melting or if the ocean is becoming more acidic.

Rothstein cautions against giving yes or no answers to such questions but instead teaching children the critical thinking skills to read, analyze, and assess various claims they might encounter. The goal is to help adolescents in that developmental stage have an informed conversation.

Regardless of a child’s age, parents should avoid emphasizing fear or helplessness when they talk about climate change.

“The trick is honesty,” says Rothstein. “You have to find that balance between freaking them out and explaining the changing world they’re living in.”

Parents who are nervous about bringing up climate change with their child might wait instead for a teacher to raise the subject first. But Edmonds-Langham says parents have a distinct advantage over educators because the former know their children’s interests, their emotional intelligence, and how they’ll be affected by news that’s difficult.

“You can find ways of supporting them, and find ways to make them not quite so sad about it,” says Edmonds-Langham.

When parents focus on solutions and highlight success stories, it can fundamentally change the way children think about climate change — and what role kids see for themselves in changing the planet’s future.

I’m personally going to remember that lesson the next time my daughter and I discuss climate change, because that possibility alone — a child finding her voice in the name of the earth’s survival — is well worth any discomfort I might feel trying to answer hard questions.